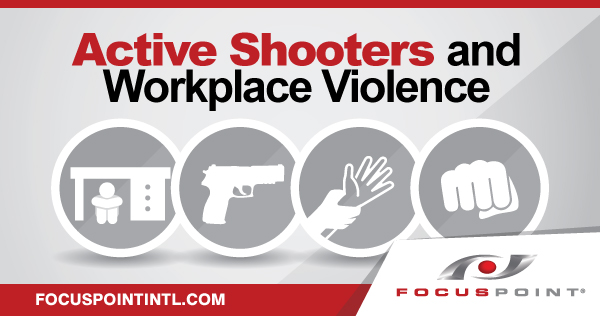 Whenever I provide workplace violence or active shooter training, I usually begin the presentation by talking about denial factors that a lot of people and organizations tend to have. One of the leading denial factors is the ‘it couldn’t happen here’ or ‘it will never happen to me’ mentality.

Last Tuesday, April 3rd at about 1 PM, I was in the process of finalizing my PowerPoint presentation for a training session for a client headquarters facility when I received a call from my son who lives in San Bruno, CA. He said that he was on his way home from work when he noticed police and SWAT teams had his neighborhood locked down. It turned out that he was right in the middle of a lunchtime active shooter incident that injured three YouTube employees. It hit a little too close to home for me and reinforced the fact that it can happen to any one of us, at any given time or location.

The number of mass shootings around the country continues to climb. The YouTube office tragically was marked as the 58th event in 2018. There have been 11 shooting incidents at elementary, middle and high schools that have killed 24 people and injured more than 40 since January 1st.

The fact is that these shootings generally take place within a few minutes. Even with a two-minute police response (as in the YouTube incident), it takes just seconds for people to be injured or killed by a deranged person.

The answer is to find a way to prevent these violent acts before they occur. This means that we need to incorporate the concept of risk assessment as a part of our daily lives. Company offices and schools need to conduct these assessments, as they are an integral part of any risk mitigation program. The first step is to identify access point vulnerabilities and areas that may be inviting for someone to commit mass violence. The key to this is to utilize reputable security professionals that are experienced in anticipating threats, identifying vulnerabilities and examining existing dynamics to determine the likelihood of occurrence and the severity of the impact. Once this process has been completed, reliable controls can be recommended to make it more difficult for an intruder to assault innocent victims.

The second part of any crisis response program is to establish policies and protocols that reinforce and validate the risk mitigation controls that have been put in place. All stakeholders such as employees, students, supervisors, and managers need to receive training to identify and be actively aware of abnormal behavior that may indicate a potential for violence. Experience has taught us that in almost every event, an aggressor will display behavioral and physical indicators that include both overt and subtle gestures before an attack or violent act.

A critical component of security awareness training is to communicate a perceived threat properly. The most recommended way to accomplish this is to ‘say something when you see something’. The training should also include what to do during an active shooter incident or violent act. The goal is to eradicate the ‘it can’t happen to me’ mentality and change the way people respond to armed or violent intruder situations.

Having a sense of awareness and a response plan is important, as incidents of violence are growing. The more we practice situational awareness and plan for these types of events, the better prepared we can be to prevent these violent acts.